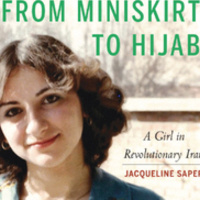 Author Jacqueline Saper Reads from Miniskirt to Hijab: A Girl in Revolutionary Iran

Jacqueline Saper was born in Tehran to Iranian and British parents. At eighteen, she witnessed the civil unrest of the 1979 Iranian revolution and continued to live in the Islamic Republic during its most volatile times. In a deeply intimate and personal story, Saper recounts her privileged childhood in pre-revolutionary Iran and how she gradually became aware of the paradoxes in her life and community— primarily the disparate religions and cultures. Seemingly overnight, she went from living a carefree life of wearing miniskirts and attending high school to listening to fanatic diatribes, forced to wear the hijab, and hiding in the basement as Iraqi bombs fell over the city. Saper eventually fled to the United States in 1987 with her husband and two children. Since 2014 she has been teaching on the topic of the Middle East at the Lifelong Learning program at Oakton Community College in Des Plaines, Illinois.

For more information on accommodations and services available to students, staff and visitors with disabilities, please see our Accessibility page.

Last Updated: 7/18/18
This event content is powered by the Localist Community Event Platform.

Login to interact with events, personalize your calendar, and get recommendations.