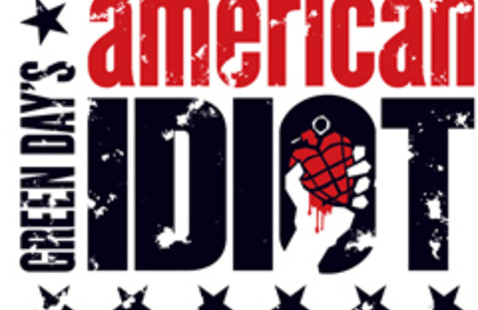 Building R, Performing Arts Center View map $15-20
Add to calendar
Save to Google Calendar Save to iCal Save to Outlook

“Rage and love, those consuming emotions felt with a particularly acute pang in youth, all but burn up the stage.” —New York Times

The two-time Tony Award-winning hit musical Green Day’s American Idiot, based on the Grammy Award-winning multi-platinum album, boldly takes the American musical where it’s never gone before. This high-octane show includes every song from Green Day’s album, American Idiot, as well as several songs from its follow-up release, 21st Century Breakdown. Johnny, Tunny and Will struggle to find meaning in a post-9/11 world. When the three disgruntled men flee the constraints of their hometown for the thrills of city life, their paths are quickly estranged when Tunny enters the armed forces, Will is called back home to attend to familial responsibilities, and Johnny’s attention becomes divided by a seductive love interest and a hazardous new friendship. An energy-fueled rock opera, American Idiot, features little dialogue and instead relies on the lyrics from Green Day’s groundbreaking album to execute the story line.